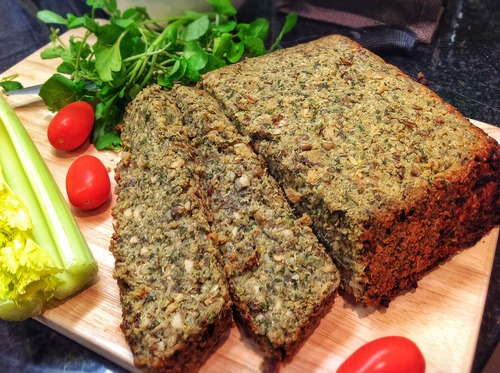 I just love savoury “no-meat” loaves of all kinds and when I initially thought about putting this recipe together I wanted to get something that was not only extremely delicious but that was also nutritious and high in protein. Here I have come up with the ultimate in “no-meat-loaf” deliciousness.  It may seem a lot of work, but trust me, reading through and preparing many of the stages in advance will make light work of this incredible tasty loaf. The textures are incredible and I assure you that one slice will never be enough. This is perfect when served hot or cold, but I also love to crumble this over a salad or slice it more thinly for a sandwich.

For the chickpea batter

Begin by preparing the quinoa and green lentils.

In a medium saucepan, add the quinoa along with half of the water and one of the stock cubes. Bring to the boil, then partially cover and simmer until all the liquid has been absorbed. Be careful towards the end of cooking that the bottom of the pan does not catch. Put to one side.

In another saucepan, add the lentils along with the remaining half of the water and the other stock cube. Bring to the boil and boil for 10 minutes before simmering for 30-40 minutes until all the liquid has been absorbed. Again, be careful not to let the bottom of the pan catch. Put to one side.

These 2 stages can be done in advance to make the preparation quicker.

Next, place the onion, kale and garlic in a food processor and process until very finely chopped.

Add the oil to a frying pan, and fry the onion and kale mixture on a medium heat, with the ¼ teaspoon of salt, until no moisture remains and the mixture is quite dry. Once again, be careful not to let the mixture catch in the pan. This should take around 10-15 minutes.

When all of these steps have been completed, move on to the next stage.

Place the toasted bread and cashews in the processor and blend until the mixture resembles breadcrumbs.

Now prepare the loaf for the tin

In a bowl, make up the chickpea batter by adding the chickpea flour to the cup of water, along with all of the other batter ingredients and whisk together.

Add a cup of water to a saucepan and bring to the boil. Whilst the water is still boiling, slowly drizzle the chickpea batter into the pan, stirring continuously, allowing the mixture to become very thick. It is important that the batter is poured in at a very slow speed.

When all the batter has been added and the mixture is thick, turn the heat to low and continue to cook and stir for a few minutes until glossy.

Lastly, add all of the other ingredients to this mixture and combine very well. The mixture will be very thick. lastly pour in the tablespoon of flour and mix thoroughly once more.

Grease a medium baking dish ( I used 5inch x 9inch ), or loaf tin, with a little vegan margarine and place in the mixture, pushing down at the sides to get into the corners.

Bake uncovered for 45-55 minutes until the loaf has set and is browned on the top.

Remove from the oven and allow to cool before turning out onto a chopping board. Cut and serve.

The first 2 stages of this recipe can be done in advance. This will reduce the preparation time by 40 minutes.

Individual slices can be frozen and reheated from frozen in the oven.

This will keep good, if wrapped in foil or film, in the refrigerator for a good 3-4 days.